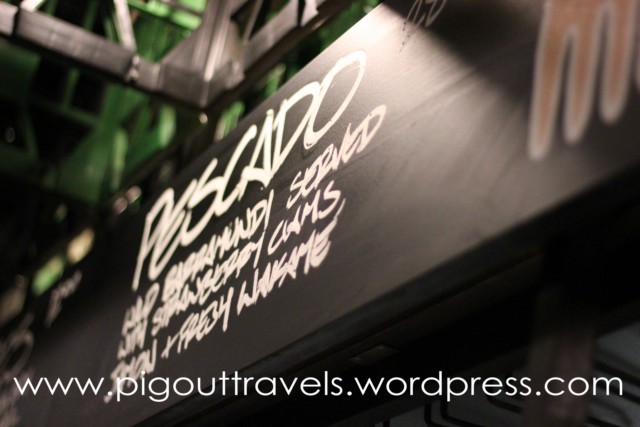 I disliked Movida Aqui when they first opened- we went out for farewell drinks and the waiter was so snobby because we were only going to have drinks and a few bites to eat. I refused to go back for about 2.5 yrs after that, but one cold Thursday night we decided to give them another chance.

We were greeted warmly by the maitre’d. We haven’t got a booking but he rustled up some space for us at the bar which was even better.  The best view of the room can be your lover’s eyes but to me, the view of the bar or kitchen offered the best view of the restaurant. A smiley bar guy got us some sangria ($35/jug), and kept topping our glasses with ice and sangria all night.

Food came pretty quickly even though the restaurant was full. Oysters were a disappointment ($19/6 oysters)- although they were fresh and plump, they were too salty and there were bits of oyster shells stuck to my oyster… did they wash it out? 😦

Fresh sea urchin $12.50 was next. Sitting pretty on this half tube of flaky pastry were thin slices of Spanish ham and a bunch of pickled vegetables. You could barely taste the sea urchin underneath all that jazz, but if your taste buds were lucky enough to find its way to the sweet, fragrant goodness, savour it.  In a flash, the flavours would be gone, once again hidden by the pickled vegies and savoury ham. What a waste, it was one of the freshest sea urchin I have ever tasted. 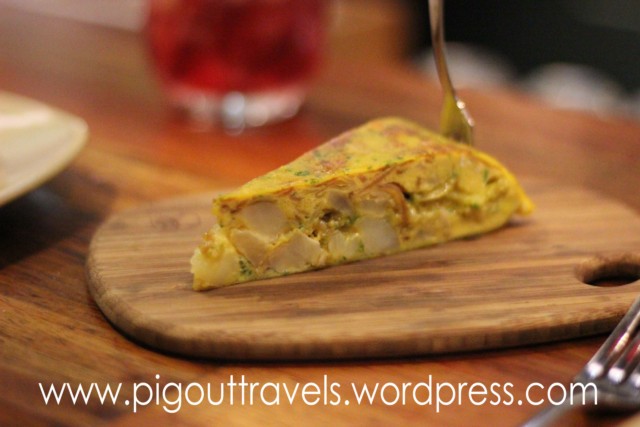 The tortilla $6 is made of artichoke and eggs instead of potatoes. I thought Hubby would be really disappointed given the fact that he hated artichoke, but he was pleasantly surprised by it. Very morish, the artichoke added a slightly creamy flavour to the tortilla- I could definitely eat more of those! 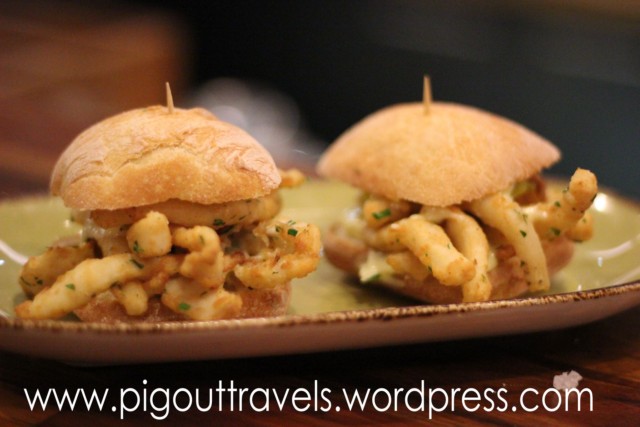 Calamari bocadillo (sandwich) is a must have ($7 each). The calamari tendrils were crispy but light, coupled with awesome mayo and peserved pepper that lifts the dish, it was good. A slight let down was the bocadillo itself. When I was in Barcelona, bocadillo I sampled was a crusty baguette like bread, whereas this one was just a slightly stodgey cold dinner roll. A real bocadillo with this calamari would have been much better. 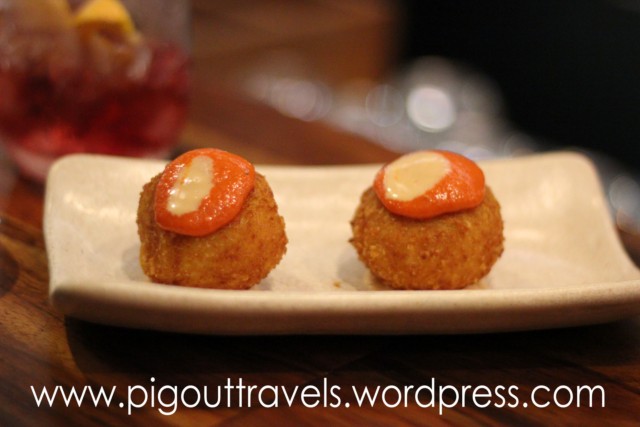 Bomba $4.80 is a deep fried potato with chorizo and a dollop of mayo and capsicum sauce. Anything deep fried is yummy, but this was especially yummy because the potato was fluffy and creamy. You can also detect a tiny bit of heat from the chorizo. YUM. 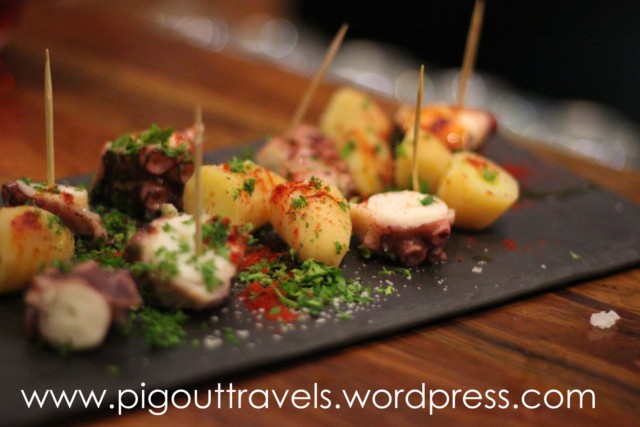 It’s dessert time, but nothing really jumped out at me from their dessert list. I decided to narrow down to two desserts and asked my friendly waitress to choose for me: Chocolate and Hazelnut Praline or Quince trifle (both $14.50)? The waitress suggested the quince trifle and I loved it. This dessert has multiple layers- sponge, quince puree, Pedro Ximenez jelly, cream with vanilla and dotted with crunchy, extremely fresh sugared almonds, providing texture and flavour contrast.  The jelly and quince puree really lighten up the otherwise rich dessert, and even though I couldn’t finish it,  it was one of my favourite dishes of the night.

Overall, I actually surprised myself by really enjoying the casual but friendly service. The food was very good when they got it right, not too bad when they didn’t. I certainly wouldn’t hesistate to come back again if I am back in that side of town next time. 8/10