Hell of The North

Hell of The North
135 Greeves St, Fitzroy/ Collingwood, Melbourne, Australia
03 9417 6660
When I stumbled across Petite Miam’s blog about Hell of The North, its name certainly piqued my interest, but it was how Petite Miam described the food that made me want to go there.  I need somewhere to impress Dr. Ben and Ahmanda, given that they have already taken me to quite a few great gems (think Sushi Bar Aka Tombo, Milawa/Bright trips, Borsch Vodka and Tears), I need to contribute more to our foodie group.

Just like Auction Rooms where we had dinner the other week, the menu wasn’t huge in Hell of The North, but they do offer a “feed me” option for $65 per head, which is same as Auction Rooms.  I kinda like the “feed me” option, cos that means you don’t really have to think too much: fabulous food arrives, I eat- perfect!

We started off with the onion soup- a bowl of heart-warming cheesy goodness.  Hubby isn’t a great fan of onion soup but he somehow ignored my offer to help him and finished his whole bowl =_=

The charcuterie plate was next, laden with sinful slices of salami and jamon, slices of buttery brioche, pate, terrine etc, it was yummy.

I love how they present each dish with a black slate- it looked so cool.  Anyway, back to the dish, this is a winter vegetable with pumkin puree.  Normally winter vegetables are meh and it could have been so boring, but the texture contrasts of the vegetables, the grains, the nuts and puree made it interesting in every bit. The freshness really shines through and we all scrambled to get the last bits of it.

Mmmm yummy yummy scallops.  This is our last entree of the night.  Cooked to perfection, served in a smooth bed of Jerusalem artichoke and some crispy pancetta dotted around it… mmmm

Our first main was a snapper and pine mushrooms.  We were somewhat sad that there were only 2 halves of a potato because that meant we had to share, but otherwise the fish was cooked to perfection- it was well seasoned and the skin was crispy and flavoursome.

Our next main is a Cassoulet.  True to the French way of cooking cassoulet, it uses different types of meat: I think there were duck, chicken, pork and some other random meat, cooked in duck fat and beans.  Hubby commented that the beans were harder than what he was used to but please ignore him as the only beans had ever had in this form were those canned baked beans 😛

After having such a rich cassoulet, I was happy to see some vegies on our table in a form of mushroom gnocchi, though I thought that this dish was a bit small for the four of us to share to truly taste the dish. 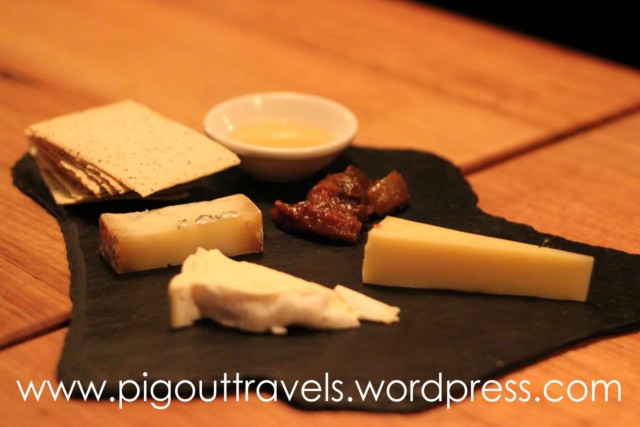 It’s dessert time and the first cab off the rank was a cheese selection with honey and figs.  I don’t really like blue cheese but this one is quite mild and the honey sweetens it nicely.

The crepe Suzette arrived flaming but I didn’t manage to catch the flames 😦  I think the flames were the only “hell” we have experienced in Hell of The North as everything was so perfect!  The orangey flavours of the crepes were sensational and although the crepes are not as silky smooth as I liked it to be it was yummy. 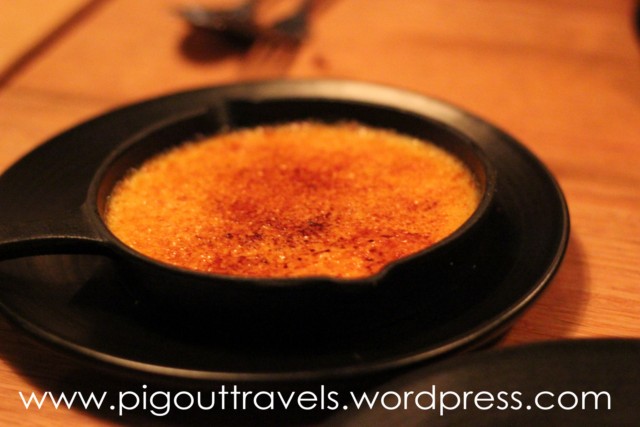 I am not too sure why I never liked Creme Brulee.  It’s not that I hate it, I just won’t order it given a choice.  Perhaps it’s because I had too many duds in my life.  In saying that THIS Creme Brulee was good.  The top was nicely caramelised with a perfect crunch, underneath was creamy.

I think all in all if I was to compare Auction Room with Hell of The North,  I love the French flavoured dishes in Hell of The North much better.  The dishes are cooked to perfection, the flavour and texture combination was fantastic.  However, in terms of the generosity of the servings, Auction Rooms was a clear winner.  We felt as if we would be better off ordering a la carte in Hell of The North as we felt that with the portion size we were offered we would have probably paid $45-50 per person if we ordered a la carte.
We all agreed that the “Feed Me” option was perhaps better suited to a small party of 1-2, but with 4 people on our table, we would be able to try most of the dishes and order what we wanted. 8/10

7 thoughts on “Hell of The North”