After our lunch on our third day in Milan, we decided to try a gelato place that’s not very far from Fresco e Cimmino.  Cioccolati Italiani is situated just behind Galleria Vittorio Emanuele II, it’s a fairly quiet street but for a queue out the door in Fresco e Cimmino. 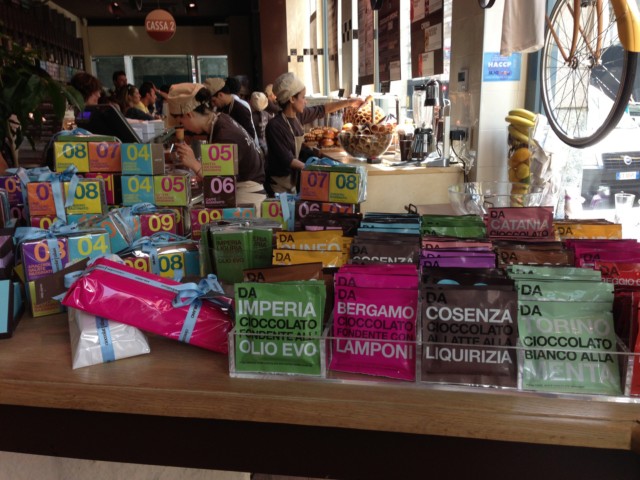 Other than gelato, Cioccolati Italiani also sells an alluring array of chocolates and pastries.  There seemed to be a spot to sit and eat also.

We were whipped into a frenzy by all these people getting gelato, and tried in vain to get through the crowds.  Turns out, you have to buy a ticket first before getting served.  You only have to decide on the size of the cone/ cup you wanted, and then slowly decide on which flavours to get whilst you are waiting.  They have a convinent numbering system so you will be sure to get served. 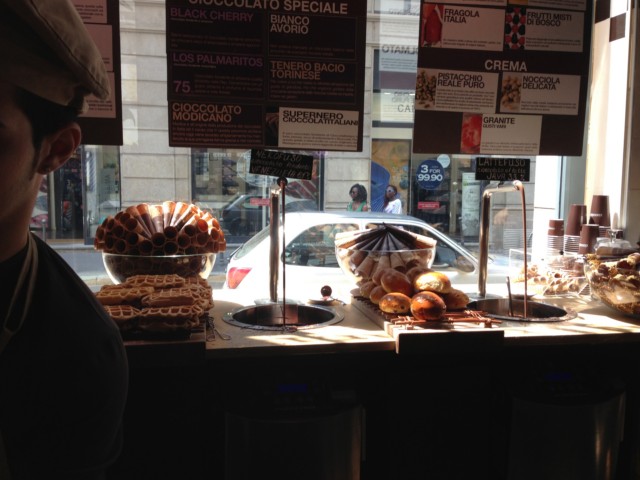 What’s interesting at Cioccolati Italiani is that there are sprouts that is constantly pouring out three types of liquid chocolate – dark, milk and white chocolate.  If you get a cone they will ask you which type of chocolate you would like and then put your cone underneath one of the chosen sprouts.  It’s like having a Drumstick in Australia- to ensure that there are “no boring bits!”.  I think if you decided on a cup, then they will drizzle the chocolate liquid on top of the cup.

I chose a cone with two scoops of gelato, super nero cioccolatitaliani (which I interpreted it as super dark chocolate) and coffee flavours and dark chocolate liquid for 3 Euros.  When I eventually got served, the very friendly server scooped and stirred the gelato in these giant silver tubs and expertly twirled it into the cone.  It looked gooooood..

Sadly when we tried it though, the four of us are not convinced that this is the best gelato.  The coffee flavour was not strong enough and our super dark chocolate was not very dark at all and very sweet.  It seemed as if this place has fool us with its long queue.  5/10

Check out the rest of my awesome European Adventures here!

One thought on “Cioccolati Italiani, Milan”