In preparation for our trip to Cambodia and Vietnam, we decided to go to Paddy Pallin in Hawthorn to buy some backpack so it would be easier for us to travel.  Of course that would mean I need to try the local cuisine in here.  Where should I go?  Of course I’d turn to Twitter for an answer!  @the_britabroad from Halcyon Future recommended  Liar Liar and Sharky from Sharking for Chips and Drinks recommended Crabapple Kitchen.  Oh dear, where to go where to go????

Eventually I asked Hubby to decide and he chose Liar Liar.

We quickly got seated and cocooned into this dark and sexy space.  Sadly looking up I saw this exposed air con pipes that looked less than sexy.  Why didn’t they cover it?  I wondered.  Anyway, I dragged my attention to the menu and ordered this delicious soy mocha. 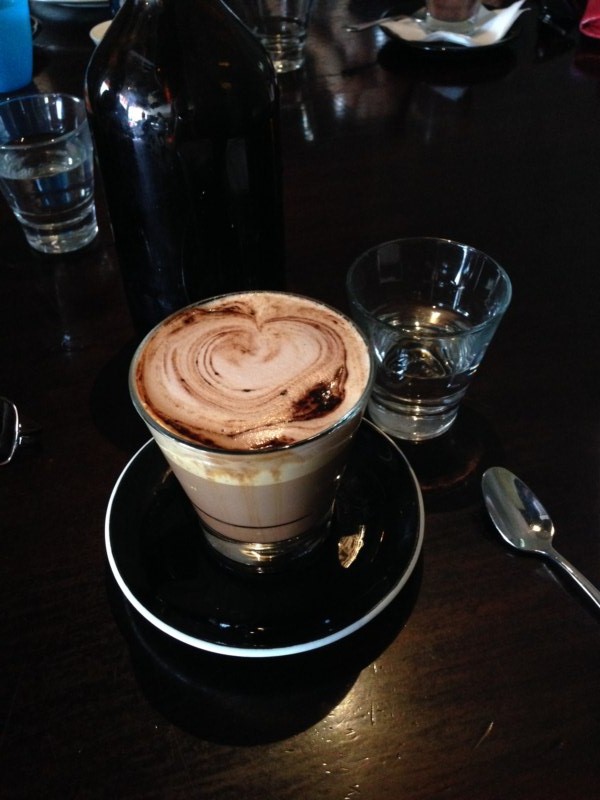 Liar Liar offered a good size breakfast menu- there are at least 10 types of brekkie with eggs and two types of sweet breakkie, not to mention their selection of cakes.  For the health conscious they also offered fruit salad and museli.  I was tossing between their ricotta hotcakes, smash avocado and baked eggs, but eventually baked eggs won.

This baked eggs dish is called Pants on Fire.  Like, you know, Liar Liar, Pants on Fire?  Yup, that’s the one.  It sounded like such a fun name, and I expected it to have a real kick to it.  Well, I was wrong.  It has a heavy smokiness, and yes, they may have made it with capsicum but it was chilli hot.  The chorizo bits in it were chewy and hard and the whole dish just seemed too heavy.  I think I ate half and simply couldn’t cope with it anymore.  I guess partly it was my fault for ordering this heavy dish in summer but it’s partly their fault for offering it also.

Hubby’s potato and quinoa rosti on the other hand was good.  It was crispy and fluffy at the same time and I had a major case of food envy, especially when I tried to steal more and hubby swat my hand away 😦

I really wanted to like Liar Liar, but I suppose it might just be my unlucky choice of brekkie this time I didn’t really think it was that great. I will have to go back one day… maybe after I tried Crabapple Kitchen.